“We are thrilled to welcome Scott home to the brew house as a part of the True West family. Our values and vision for killer local beers, produced by and for community engagement could not be more in tune.”

True West has found our new Head Brewer in Scott Houghton! As fans of True West learned earlier this year our founding Brewer, Russell Carpenter left for the DC area as his wife Kathy pursued her career in academia at George Mason University. Russell is currently working the buildout on a new brewery, Rocket Frog, in Sterling Virginia while simultaneously supporting thirsty True West SHARE members by returning every few weeks for marathon brewing sessions with the team here. After an exhaustive search for, not only talent and precision, but business acumen and the right values we are confident we have found the right Brewer to take True West forward.

Scott brings over 20 years of brewing experience to the True West brew house. He joins us directly from Downeast Cider in East Boston where he has been the Head Cider Maker, leading a team of 6 producing 37,000 barrels of cider annually. Prior to Downeast Scott has been a lifelong brewer, having started in 1992 at the Frank Jones Brewery in Portsmouth, NH, evolving to a 12 year tenure at Salem Beer Works where he was named Head Brewer and won Gold Medals at the Great American Beer Festival in 1997, 1998 and 2000. Awarded the William Hipp Scholarship, Scott moved on to the University of Wisconsin through the Master Brewer’s Association of the Americas “Malting and Brewing Science” program. He then went on to serve as Technical Chairman of the New England District MBAA and also to several years of domestic and international brewing consulting which led to co-founding and developing the concept for Battle Road Brewing Company. Now back home in the brew house at True West, where he can do what he loves best; brewing delicious beer for an engaged local community.

Never fear True West faithful, the RUCKUS! remains and Scott will carry that and several other True West standards forward. But do stop into the taproom and meet our new Head Brewer and learn about all of the exciting new features and seasonal beers Scott has planned for you all. 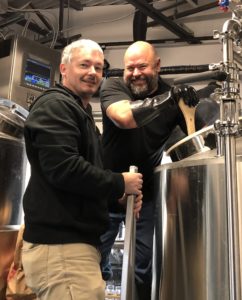